Jump to Latest
VTEC Goes Bwaah
Honda revealed their lineup for this year's SEMA show and they're going all out! They're bringing 7 vehicles highlighted by two new Civic Si race cars! 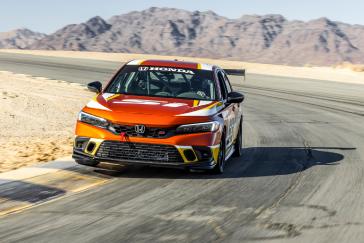 Honda will demonstrate its diverse paths to fun and performance at the 2021 SEMA Show in Las Vegas Nov. 2-5, showcasing seven vehicles, including the debut of two all-new Civic Si race cars and a pair of rugged Honda light trucks custom-built for extreme overlanding adventures.

October 26, 2021 — TORRANCE, Calif.
Honda will demonstrate its diverse paths to fun and performance at the 2021 SEMA Show in Las Vegas Nov. 2-5, showcasing seven vehicles, including the debut of two all-new Civic Si race cars and a pair of rugged Honda light trucks custom-built for extreme overlanding adventures. Honda will be located at booth #25077, in the southeast corner of Central Hall at the Las Vegas Convention Center.

Building upon the thrilling performance of the all-new 2022 Civic Si, Honda Performance Development (HPD) will showcase a prototype of its next-generation turn-key Civic Si race car. Designed for Touring Car competition, it will be displayed alongside the new Team Honda Research West (THR-W) Civic Si race car, which will compete in the 25 Hours of Thunderhill endurance race December 3-5.

Built from a body-in-white for SRO TC Americas, amateur touring car series, club racing and dedicated track day use, the race car foregoes a sunroof, sound proofing insulation, underbody coating and seam sealer to reduce weight and aid in roll cage installation. The car is then specifically modified for racing using a selection of HPD, and other performance and safety components.


Team Honda Research West Civic Si Race Car
A new Civic Si race car built to compete in the National Auto Sports Association’s (NASA) 25-hour of Thunderhill sports car race in Northern California Dec. 3-5 will also debut at SEMA. A key example of the Honda "racing and challenging spirit" in action, the THR-W Civic Si race car was developed and tested utilizing the professional knowledge of volunteers from multiple Honda divisions involved with design, engineering, manufacturing, marketing and finance. At Thunderhill, the modified, race-ready version of the all-new 2022 Honda Civic Si will be driven by a team of Honda associates. The team recently completed the first test of the Civic Si race car at Thunderhill in advance of the race.

Founded in 1996, THR-W team members use their experience on the racetrack to improve the design and engineering of Honda production cars and light trucks for the street. THR-W has a long record of success in racing Honda products in both Sports Car Club of America (SCCA) and NASA competition, with more than 60 race victories in a variety of classes, including a class victory at the 25 Hours of Thunderhill in 2013.


Team Liquid 2022 Honda Civic Hatchback
Continuing its leading presence in gaming and esports, Honda is once again the exclusive automotive partner and official vehicle of Team Liquid. This year, Team Liquid and Honda celebrate their partnership at SEMA with a customized 2022 Civic Hatchback, showcasing a wide array of accessories from HPD and Honda Genuine Accessories.


Fifteen52 Project 96 Accord Wagon
Built in conjunction with HPD and Mountune, and powered by an HPD Civic Type R crate engine, the Fifteen52 Project 96 Honda Accord uses the mid-90s Japanese Touring Car Championship-winning Accord as its inspiration. In addition to installing the engine, Fifteen52’s partner Mountune made numerous other modifications to enhance handling, safety, and braking for this track-only racecar replica. The exterior sports a white, orange, red and green paint scheme designed by the founder of Japanese racing car constructor Mooncraft Co. Ltd, Takuya Yura, modeled after the original JACCS race car scheme. Other modifications enhance the period-correct authenticity, such as the inclusion of Japan-specification headlights, and replicas of the JACCS car’s aerodynamic exterior mirrors.


HPD K20C1 Crate Engine Package
Available directly from Honda Performance Development (HPD) is the HPD-developed Controls Package and K20C1 Crate Engine for use in racing and off-highway applications. This crate version of the engine found in the Civic Type R had been available previously to Honda Racing Line members and race teams. Now, any driver can purchase the HPD Crate Engine Package, specifically designed for easy, affordable and reliable swap applications.

Each Crate Engine comes with an engine long block, alternator, turbocharger, and starter motor. Included within the Controls Package is an HPD-developed ECU, engine swap harness, and accelerator pedal. Developed with ease-of-use in mind, the HPD ECU will be pre-tuned for convenient installation into a wide range of vehicles designated for off-highway applications, providing customers with HPD’s proven reliability and enhanced performance in their own racing vehicles.

The complete package is available now through HPD’s official dealers. Customers can contact the dealers directly to purchase a package as well as receive expert technical support for custom installations in their vehicles.

The Honda Africa Twin is already ideally suited for overland adventures, thanks to its crisp-shifting and easy-to-use dual-clutch transmission that simplifies the riding experience, allowing riders to focus on the trail ahead. The Africa Twin Overland is finished in Darkness Black Metallic, a new color for the 2021 model year.

Joined 2 mo ago
·
87 Posts
Honda posted this cool racing promo that features the new Civic.
Too bad the Civic racer wasn't in it.

Joined 2 mo ago
·
87 Posts
Here's more of the HPD Civic and a first of the other from Team Honda.

Joined 1 mo ago
·
29 Posts
Love the race cars, and the K20C1 in the Accord Wagon is just the cat's meow (even if the exterior color scheme is rather ostentatious).
Has anyone gotten wind of what HPD is charging for the K20C1 crate engine and control pack?

Joined 2 mo ago
·
87 Posts
No matter how many times I see those HPD wheels they just never grow on me.

I wish Honda came up with something better looking.

1 - 14 of 14 Posts
Join the discussion
Continue with Facebook
Continue with Google
or sign up with email
About this Article
0 likes
13 Replies
Written By: