Jump to Latest
hondapwr
This one-owner 2000 Civic Si sold for a high price, even with 41k miles on the clock. 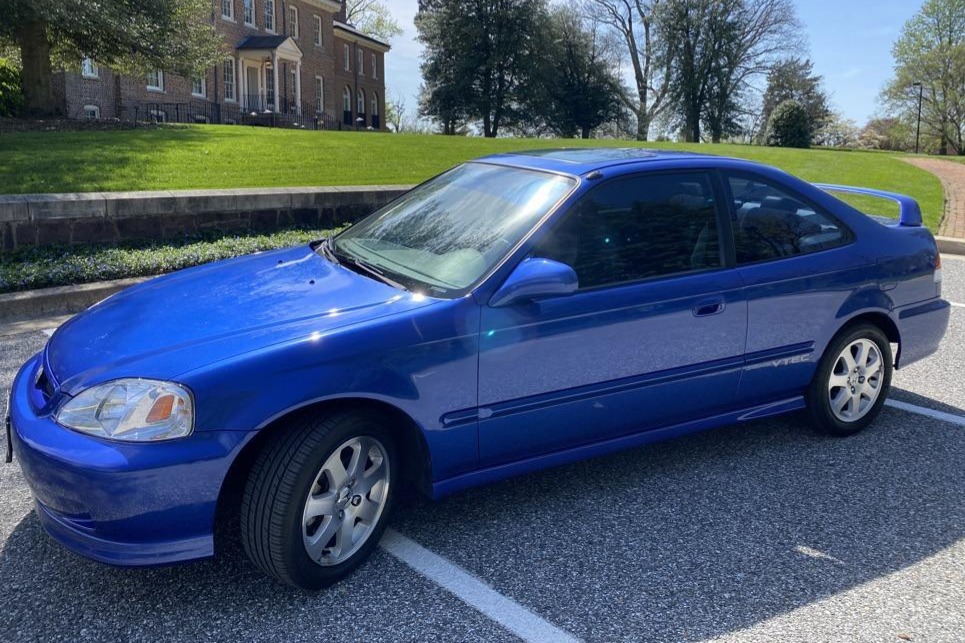 Bid for the chance to own a One-Owner 41k-Mile 2000 Honda Civic Si at auction with Bring a Trailer, the home of the best vintage and classic cars online. Lot #72,652.

This 2000 Honda Civic Si was purchased new by the seller in Maryland and is finished in Electron Blue Pearl over gray cloth upholstery. The car is powered by a 1.6-liter VTEC inline-four paired with a five-speed manual transaxle, and additional equipment includes a power sunroof, air conditioning, cruise control, a receiver hitch, a raised rear spoiler, four-wheel disc brakes, and 15” alloy wheels. This EM1 Civic Si shows 41k miles and is offered with manufacturer’s literature, two keys with fobs, uninstalled fog lights, a clean Carfax report, and a clean Maryland title in the seller’s name.


The car is finished in Electron Blue Pearl (B-95P) and features DOHC VTEC side graphics as well as a raised rear spoiler with an integrated third brake light. Additional equipment includes a power sunroof, a Draw-Tite receiver hitch, and tinted glass. The seller notes a chip in the windshield, a dent in the hood, and peeling window tint on the right-side window. Photos showing VIN-stamped stickers are provided in the gallery below.

This is a re-list after the vehicle was previously sold on BaT in October 2021 and the winning bidder failed to follow through with their commitment to purchase. This was not due to any fault with the vehicle. The winner has been banned from future participation on BaT and their buyer’s fee was not refunded.

Factory 15” alloy wheels are mounted with 195/55 Michelin Premier A/S tires, and wheel locks are installed at all four corners. The Si model came equipped from the factory with a sport suspension, a front strut-tower bar, and revised front and rear sway bars. Stopping power is provided by four-wheel disc brakes.

The four-spoke steering wheel frames a 140-mph speedometer, a tachometer with an 8k-rpm redline, and gauges for coolant temperature and fuel level. The six-digit mechanical odometer shows 41k miles, all of which were added by the seller.

The 1.6-liter B16A2 inline-four features VTEC variable valve timing and was factory rated at 160 horsepower and 111 lb-ft of torque. The seller reports that the engine control module and the battery were replaced in 2022.

Power is sent to the front wheels through a five-speed manual transaxle.

Joined 5 mo ago
·
1,162 Posts
I had that exact same car back in 2000, that I bought brand new, same colour, they were called SiR's here. It was a cool car but the lack of torque was really bad. Dollar for dollar I'd rather than the new Si.
1 - 2 of 2 Posts
Join the discussion
Continue with Facebook
Continue with Google
or sign up with email
About this Article
0 likes
1 Reply
Written By: